I love inviting people to join me in a good meal.  Something good happens when you put great people together around a table for a meal.  There is laughter, encouragement, stories, pictures, and even fashion shows….yes, it was an Event of all Events….brunch started at 11 and guests didn’t depart till almost 7pm….the Brunch of all Brunches! And so much fun, enjoying my friends, some of which I have known for over 25 years….that’s the best part.

And the food….yes, I woke up early, so I could pop the scones in the oven…made three different kinds – blueberry-lemon, 3 cheese, and almond-pistachio scones…..I give a huge shout out to Sally’s Baking Addiction! (www.sallysbakingaddiction.com) I had not made scones in a while and ended up using one of her suggestions to Grate Frozen Butter! Yes, I did not understand that concept until I used it, and tried the scones and me, oh, my…it makes a Huge Difference! Though I did end up using almond milk instead of heavy cream and they still turned out pretty good.

I took 2 tablespoons of Trader Joe’s organic Superfruit spread and beat it with one 8 oz. package of cream cheese, and that became a way to elevate the taste of the scones, as I did not add much sugar to them – I actually used Swerve instead, so they were not uber sweet. The cream cheese mix just added a layer of sweetness to the scones, and that really made the cheese scones shine, as they were sliced in half, with a slice of sharp cheddar cheese in the middle and a dollop of the cream cheese – talk about scone sandwich heaven! Delish.

But there was more than just scones to share….I made two different kinds of quiches – a spinach quiche and a veggie quiche.  Out of the two, I adore the spinach quiche, as it’s about 1 1/2 lbs of spinach!

Why do I love quiche? Let me count the ways! You can have quiche for breakfast, lunch and dinner. All you need to do is heat it up and in less than a minute, accompanied by a green salad or fruit salad or a croissant, or a scone, you have a quick delicious meal that satisfies.

This is a crust-less quiche – I started making quiches without crust a few years ago, as it helps to decrease the amount of calories. Here’s the recipe for my spinach quiche:

Chop one medium onion, and cook on stovetop till translucent. Use a dash or two of sea salt and freshly grated black peppercorn as per your taste; I added a heaping tablespoon of real bacon bits. When I drained the spinach, I mixed those ingredients together.  In a separate bowl, I used 5 eggs mixed with almond milk, and an estimated two tablespoons of heavy cream, alongside 1/2 cup of parmesan cheese.  Mixed all the ingredients together, placed in the ceramic pie plate, and into the oven it went for 1 hour and 15/20 minutes at 350.  You will want to not open the oven during this time, so save this for last, as typically I will bake everything first, and put the quiche to bake last.

This was so yummy….I love spinach!

You can use the same basic ingredients and then add whatever veggies you have – for the other two quiches, I used a pint of chopped portabella mushrooms, onions, bacon, and fresh broccoli, as well as shredded 3 kinds of different cheeses.   The quiches were accompanied by a green veggie salad and a fruit salad. 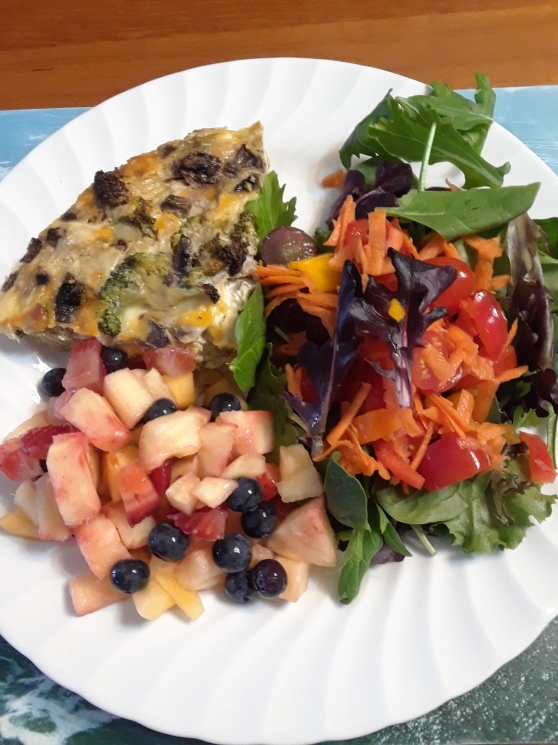 Last but not least, I made chocolate cupcakes, using coconut oil, Swerve and maca in this outrageously light and fluffy concoction that paired with a hot cup of coffee made my tummy happy! 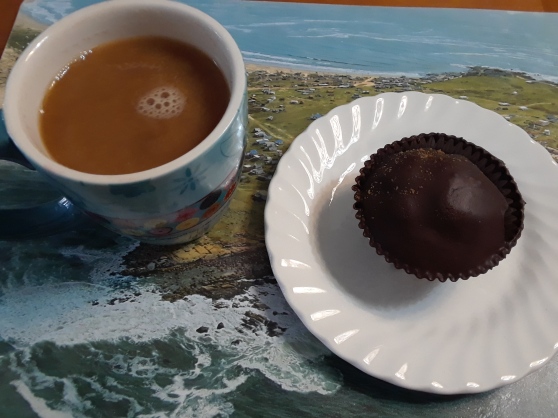 I dipped the chocolate cupcakes into a hot bowl of chocolate ganache, using Venezuelan and Colombian dark chocolate, alongside a bag of Trader Joe’s chocolate chips and using almond milk to melt it all together. After visiting Whole Foods last week, a small packet of Justin’s Chocolate Hazelnut and Almond Butter caught my eye, and as I was looking to take the ganache to a different level, I added it in and made sure it was well incorporated. I sprinkled a little bit of organic coconut sugar on top…..I had one this morning and it was really delicious with a hot cup of Café Bustelo.

I love brunch, as there are innumerous options of what to make that can later become easy meals to put together.  What did you do on February 29th?